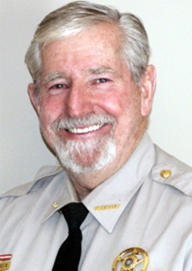 Sheriff Muller has been a resident of Adams County for the past 65 years. After High School, he joined the U.S. Marine Corps where he served his country for (6) years as a Recon Marine with the Second & Third Divisions including a 13-month tour of duty in Vietnam in 1966 & 67. He was honorably discharged with the rank of Sergeant E-5.  Arriving home, Jim worked in the building construction trade as a Mason for (25) plus years and achieved his goal of starting and successfully managing his own masonry company. Later, Jim again became interested in a public service career.  Through a variety of law enforcement and criminal justice positions, he became a member of the Adams County Sheriff’s Office, a position and organization he loves.  He has over 26 years in Law Enforcement with (22) of those years in the Sheriff's Office and the past (16) as your Sheriff. Jim is active in the shooting sports. In 1985 he won a National Pistol Championship and has participated in numerous NRA sanctioned pistol matches ever since. He is a proponent of physical fitness and has participated in the PA Police Olympics winning numerous awards. He brings that love of physical fitness to the community, especially among its children by having sponsored and coached a team in the New Oxford Pee-Wee league. He has also helped trouble youths by being a “Big Brother” through the Adams County Youth Advocacy Program. He has donated his time and labor in the Masonry field to help build a concession stand at the New Oxford Senior High School football field, and will again use his expertise in Masonry to help in the construction of the Adams County Law Enforcement Assn. Firearms Range. He is actively involved in his community and belongs to a host of organizations including; The National Sheriff’s Association, The PA Sheriff’s Association, The Adams County Chiefs of Police Association, President of the Adams County Law Enforcement Association, South Central Pa Terrorism K-9 Task Force, and the North American Police Working Dog Assn.  He is a Life Member of the following Organizations: Veterans of Foreign Wars, Marine Corps League, North American Hunting Club, NRA, and New Oxford Social and Athletic Club. He also belongs to the McSherrystown Fish and Game, McSherrystown Home Association, Littlestown Fish & Game, Gettysburg Eagles, Gettysburg Legion, Gettysburg 40 & 8, and A.B.A.T.E. Other associations include: Criminal Justice Advisory Board (CJAB), Fight Crime Invest in Kids, Easter Bunny Foundation, Deputy Phil Program, and Adams County Tech Prep. He is also a member of the Constitutional Sheriff’s & Peace Officers Association (CSPOA) and a strong proponent of the Second Amendment.